In her latest feedback Sian suggested some other ideas to consider and develop before starting to make the final piece for this Module.
1 - Use of lines/threads to connect all the pages of the folded “book of blogs” as a symbol of interlinking
I think this is a super idea! I like the notion of having continuous lines that hold their shape well in between the pages, so I prepared a thick machine cord using the method learnt in Module 3. I wanted quite a stiff cord that could make loops easily, so I used a string as the core and densely covered it with threads according to my colour scheme for this module (green and red). This cord is threaded through the four corners of the pages and has the added advantage of making the book structure stronger.
To suggest the multiplicity of links I decided to prepare another thin cord to make turns in and out of the main links. I used a 0,5 mm thick nylon fishing line and wrapped it sparsely with threads that don’t cover it completely since I wanted to preserve the idea of transparency and visible “lightness”.
Here are some snapshots of a folded cardboard mock-up, shown as a whole, in a partial view, almost closed and closed – when the book is closed I like how the links remain visible from all sides. 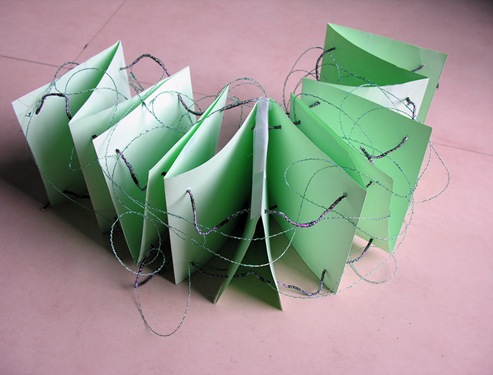 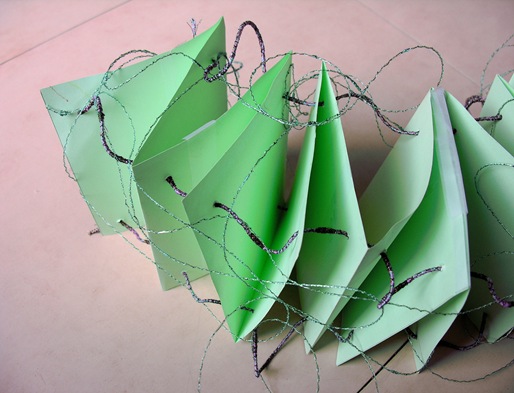 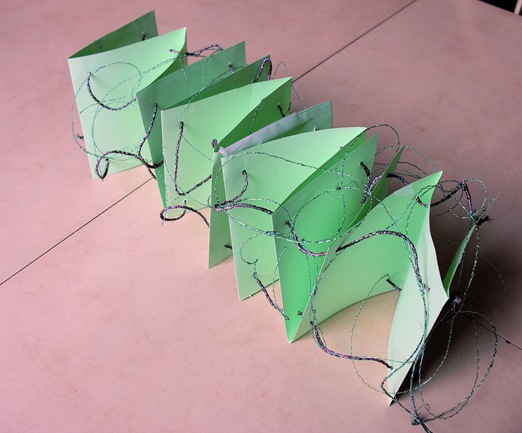 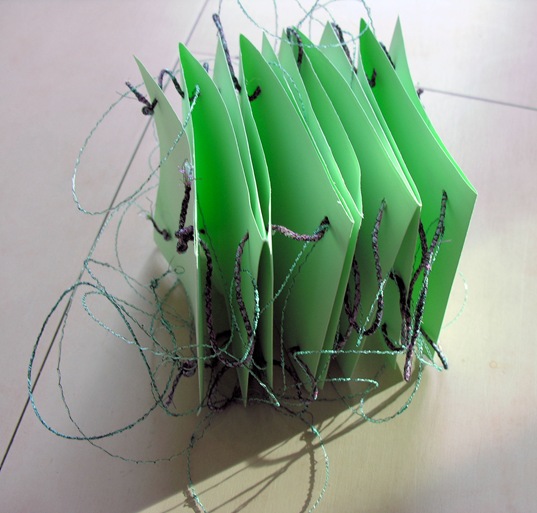 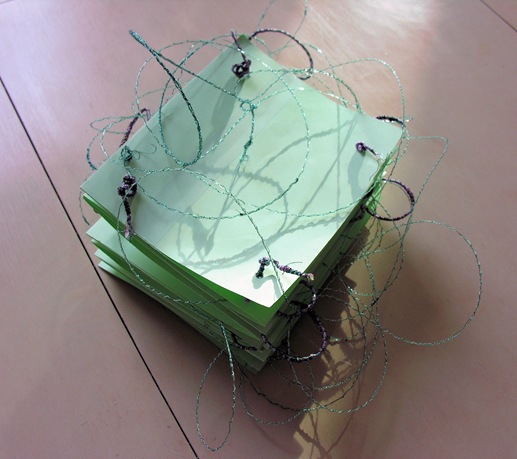 2 - All important decision to take: the embroidered panel is just a page of the book OR the embroidered panel is the whole sheet before folding it up
I prefer to think the whole piece as the embroidered panel, and not a single page for example the cover. This means as Sian said that I need to consider the overall look of the piece both opened and folded to achieve a visual unity.
With this aim in mind this is the way I think I am going to proceed:
- working contemporarily on the sheet as a whole both front and back BEFORE folding it up so as to not lose its overall appearance, and keeping a restricted range of colours mainly green shades with only touches of pink/reddish
- creating empty areas and frames in some pages cutting out parts of the sheet and reutilizing them as little folded books, small structures, grid material and so on as I did in my mock-up from my latest post. I think the reuse of these emptied areas in other ways can help in making the pages look as a whole even if they are different from each other
- threading the cords in the same way as or similarly to what shown in the previous photos in order to visually link the pages

3 - Practical decision to take: which material is to be used as a stiffening agent
My first thought was pelmet vilene. I considered both the classic weight and a new heavier version, the heavy craft plus. The heavy craft plus is absolutely too heavy and bulky and since this is after all a medium size project there is no real reason to use it.
I already had some Lutradur in the light version which could not be considered as a stiffener but since this material has a nice spunbond structure – it looks a bit like certain oriental papers, another reason why I like it - I decided to order the heaviest type and have a go at it.
I sponge coloured it with light washes of green – I used Setacolor Transparent – and I must say that I like it because it is reasonably rigid but also not thick, still partially transparent even in the heavy version and especially because its structure looks very nicely shaded when coloured.
Here is a photo of this new material after colouring 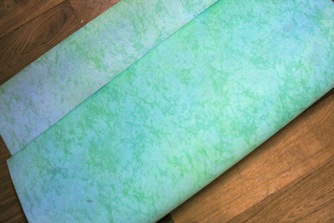 I think I am going to use it as a background and gradually add thin layers to it – like hand-made papers, scrim, nets, grids, lettering etc. I would like to obtain a final sheet that is not too thick and dark, with a delicate appearance since I feel the blogging theme as “ethereal” and light. I have to find a way of making crisp folds since Lutradur is rather springy and does not seem to hold folds well. Perhaps I could run the folds in the sewing machine or check if gently scoring the folds like cardboard might work.
At a later stage I might decide where to cut my windows and frames and how large they are going to be in order to not weaken the sheet too much. Perhaps some cut-out areas might be filled in with mosquito net (another suggestion by Sian) perhaps with the addition of handmade paper …
Happy weekend to everyone
Pubblicato da Unknown a 1:11 PM

Email ThisBlogThis!Share to TwitterShare to FacebookShare to Pinterest
Etichette: Module 4