So at last here it is. I think I can call it off if Sian agrees. I made some additions/changes from Stage Five. Right side: I added more beads on the ridges of the wavy element because I wanted them to come out more; I also added a second copper fan to the brass one and created a beaded core between the two with the aim of improving focus in that area. And I decided to turn the point of the embroidered element upward so as to obtain a stronger spiralling effect around the neck. Left side: I thought that the pointed end was a bit dangerous for the skin/clothes and unnecessary, so I turned it on itself creating a new loop. I like it better now. On the neck: I wrapped a shining multishade embroidery thread since that area looked to me still a bit dull. I think that this thread added to the woollen one makes the neckpiece slide better and be more confortable to wear. Back part : Finally I turned the neckpiece over and sewed a self-dyed soft velvet on the back of the embroidered part since some metallic threads were scratchy on the skin. The velvet also pads this part and helps keeping it as a whole. I stitched folds and ripples on the velvet to encourage the upward movement toward the neck. Front view 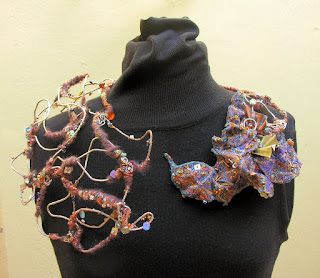 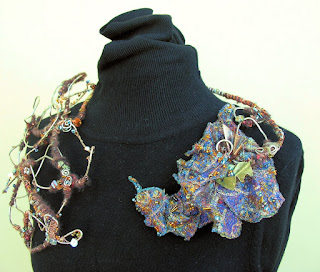 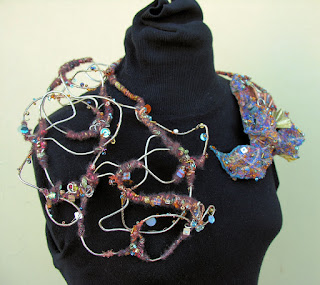 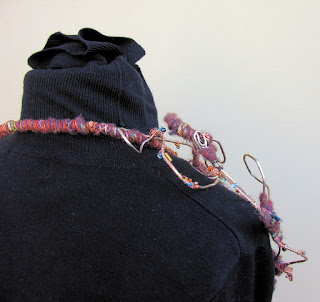 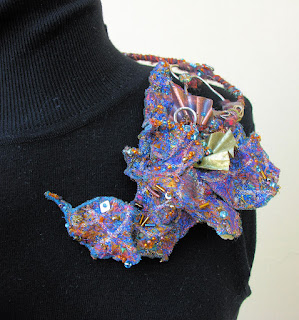 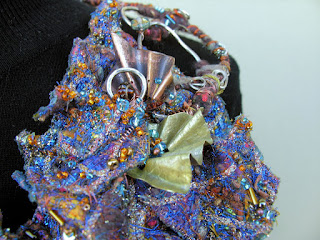 And this is the neckpiece seen from the back with the addition of velvet on the left. 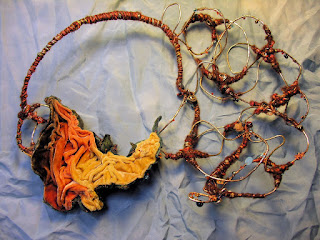 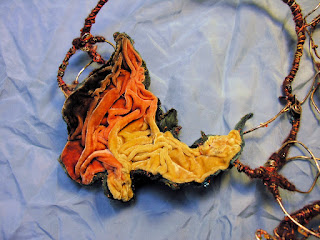 The neckpiece keeps its shape but is not rigid and can be wrapped around the neck a bit more or a bit less since the copper of its structure maintains its flexibility. It weighs 190 grams. I wouldn't say I could wear it in the supermarket but on a special evening one never knows ...
Pubblicato da Unknown a 11:32 AM 4 comments:

Email ThisBlogThis!Share to TwitterShare to FacebookShare to Pinterest
Etichette: Module 3

Making of final accessory for Module 3

After reading Sian's comments and suggestions on the mock-up I thought it was time to go on and work on the real thing. I reconsidered my earlier drawings and as I had already done for the mock-up I formed and arranged my spirals/swirls directly on the dress-form. My first step was to create the wire structure for the neckpiece and in so doing I aimed at following Sian's first tip to aim at more focus in the overall composition. I still liked the idea of an asymmetrical structure and I wanted an initially "heavier" side like I had done in many of my preliminary drawings. The main problem was to find ways to create a balance on the "lighter" side in later stages. Stage One I decided to use the 2 mm silver plated round copper wire I had already investigated and bent it mostly using my fingers with the occasional help of a round-nose pliers. I then hammered the final structure flat to obtain an irregularly square wire and also in order to work harden the metal and so strengthen the whole thing (this is a jewelry technique which I learnt recently). Here it is. 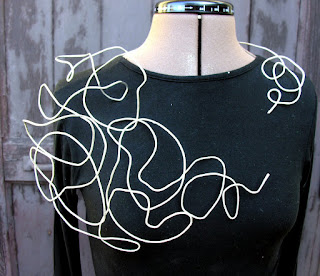 Stage Two
Since I wanted a warm and slightly golden patina on the wire, I dissolved some liver of sulphur in hot water and left the structure in it for half a minute.
Using a smaller wire I made coils and blocked with them the main joints of the structure, crimping them on and around overlapping points. At this point the loops and shapes were stronger.
Following another suggestion by Sian I started wrapping different threads on selected areas of the structure in varying thicknesses.
You may see below a general and a detailed view of how the neckpiece looked at this stage. I had the feeling that the metal and wrapped parts still looked a bit separate and needed other elements that helped to connect them. 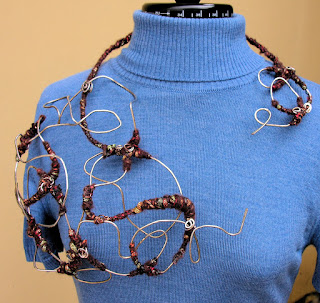 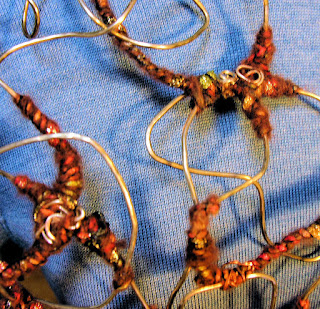 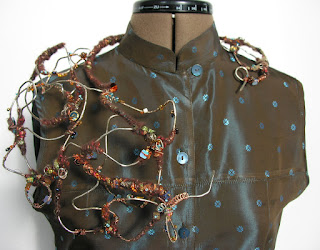 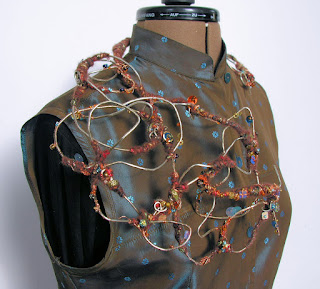 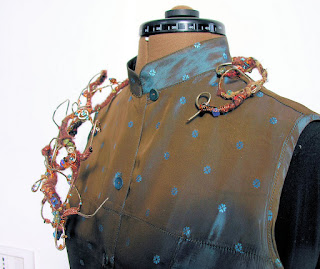 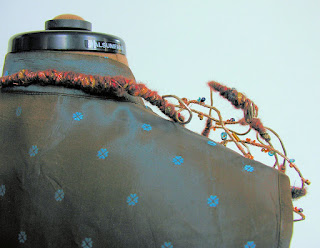 Stage Four At this stage I felt I needed something more on the lighter weaker side. I thought of creating just one special big "something" instead of the several buttons/brooches of the mock-up.
After playing around with different ideas (an elaborate piece of metal, a large button, a special clasp) I thought that a fabric element might match better with the wrapped woolly areas.
I made a sandwich of a self-dyed bluish silk prepared earlier in this module, metallic and embroidery threads, sequins, pieces of other fabrics and two layers of hot-water soluble fabric on top and bottom and machine-embroidered them all together. I cut up the embroidered fabric in smaller pieces and zigzagged around all of them.
This is how they looked with the hot-water soluble still showing. 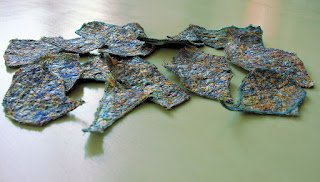 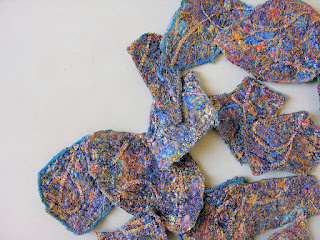 And here are the same pieces after submerging them in hot water for a brief time. The dissolvable fabric has shrunk and they have now a bumpy texture with folds and valleys. 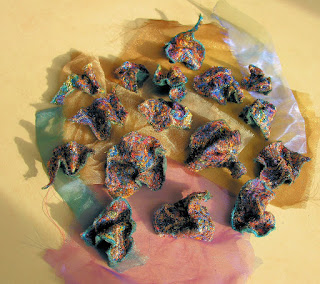 Stage Five
The next two photos show how different embroidered pieces were sewn together to form a sort of brooch on the right side.
I have also added a piece of forged brass under the small last loop. I hammered and worked folds in it on an anvil, drilled holes and stitched it in place. 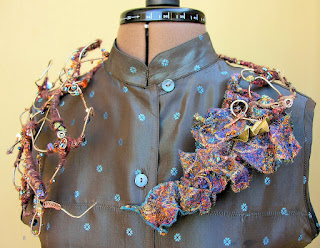 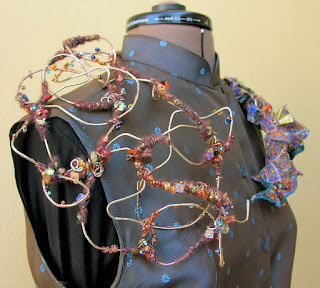 I now hope to get my neckpiece finished and make a final post about it next week. I can't bear to look at it any longer, it's been too long!
Pubblicato da Unknown a 7:10 PM 3 comments: