After the first set of warm-up experiments in texture in my sketchbook I concentrate on more considerate exercises meant for inclusion in a portfolio later. 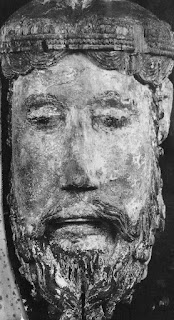 My first source of inspiration is the same beautiful gothic wooden sculpture from Medieval France used before. The original photo shows layers of soft mellow colours consumed by time that I shall probably consider also for my colour studies at a later stage. But here again it is in its black and white version. It presents several areas that can be texturally interpreted in a great number of ways.


This time I am choosing the beard and mouth area: when enlarged it shows up a very rich surface. 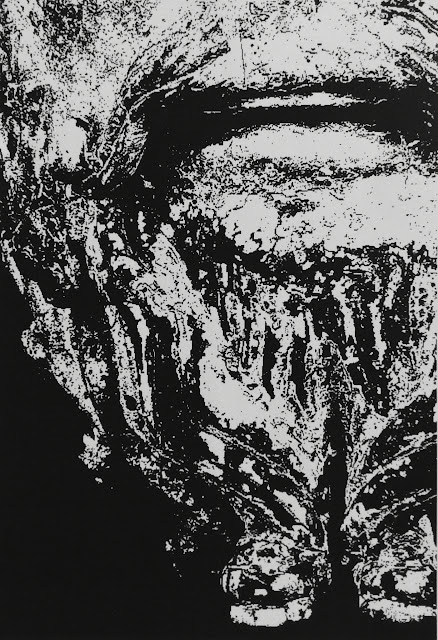 In this first version I crimpled and glued a sheet of kitchen aluminium foil on a gessoed paper creating larger folds in the lower part and shallow wrinkles at the top. To accentuate the beard effect I added long fibers below - I do not know what they are exactly, they have been hanging around for years ... Higher up I pasted what I think are dried chamomile flowers also from uncertain origin. A layer of emulsion paint covers everything, with some golden accents. 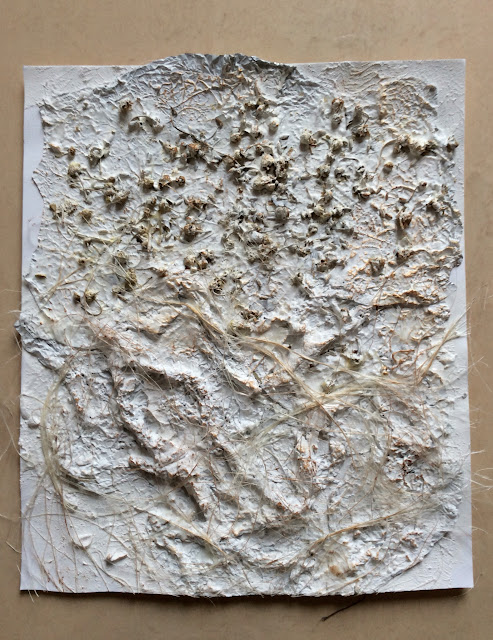 Here a detail of this texture 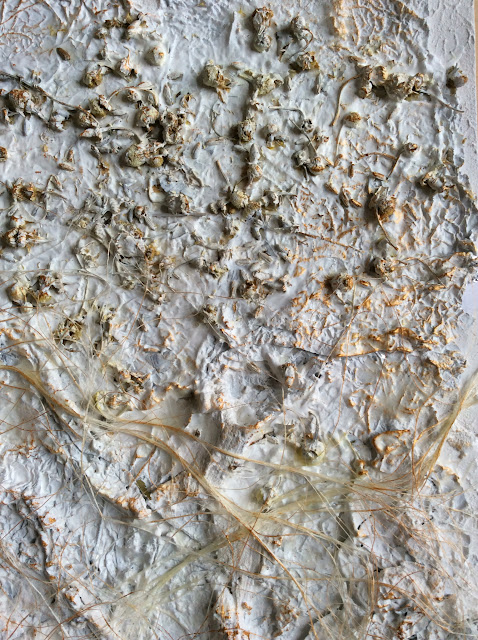 Then I made a second and more pronounced version of the beard. In this case I used a polyfoam cover I had saved and sprayed it several times with a white acrylic enamel. The spray reacts chemically with the foam creating an interesting potholed surface - of course this must take place in the open air to avoid inhaling dangerous fumes. The texture on top is obtained with tissue paper imbued with white glue to get a rigid finish. This time I brushed on some silver acrylic to emphasise the texture. 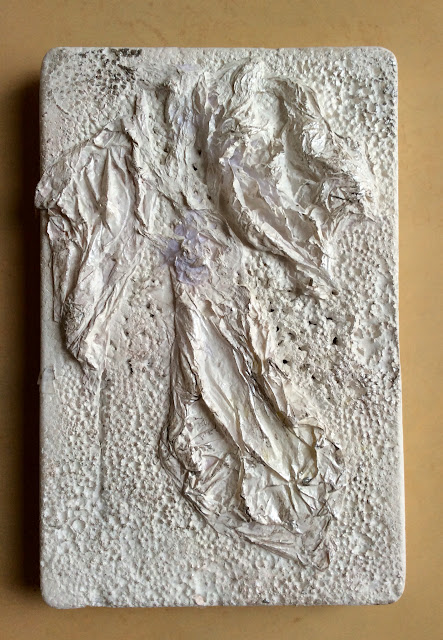 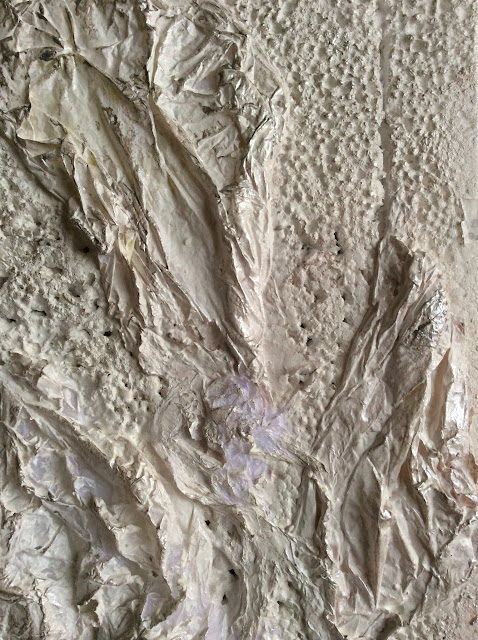 For a new textural sample I use another area of the same photo, in fact the same area I have already studied in my sketchbook. I am reloading it for reference.

My attention is drawn to the tubular forms especially and I repeat them several times. Their main structure is made up of big plastic straws partially covered with gessoed cheesecloth. On the left I have used synthetic petals from an old Christmas decoration, on the right I have applied here and there some loosened up cotton balls. As usual everything is made more uniform by white emulsion. I decided to develop this sample vertically so I flipped my image accordingly. 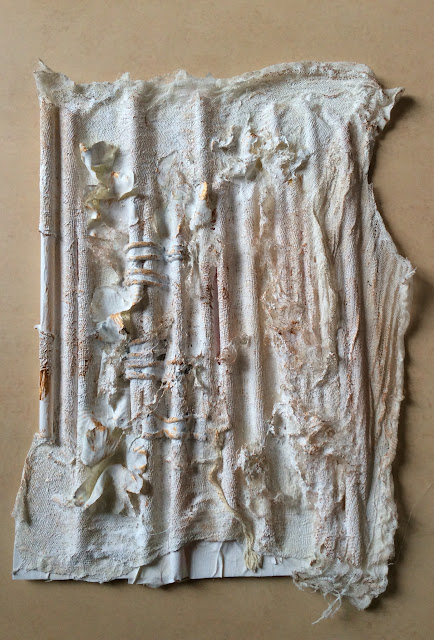 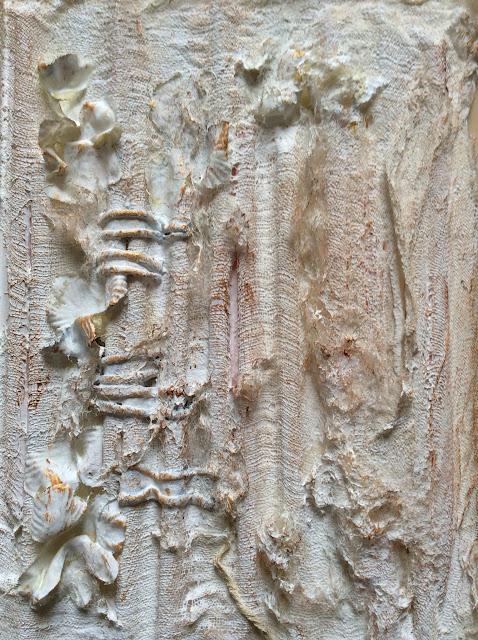 A HEAD BY GEORG BASELITZ

For my next experiment I am using another image from my heap: this is a very strong wooden head by German sculptor Georg Baselitz. 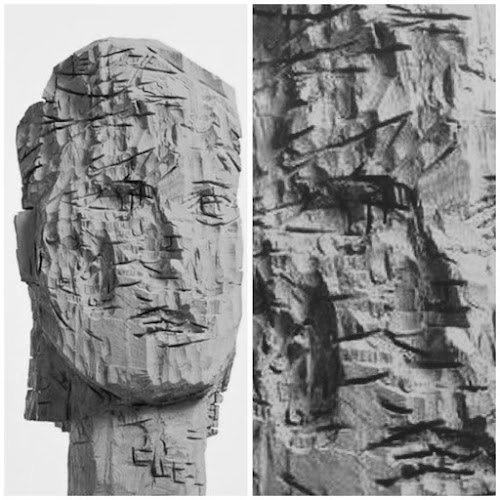 It is not a 'pretty' piece, with its harsh yellow colour and its lines that look like they have been stabbed into the wood with heavy blows. 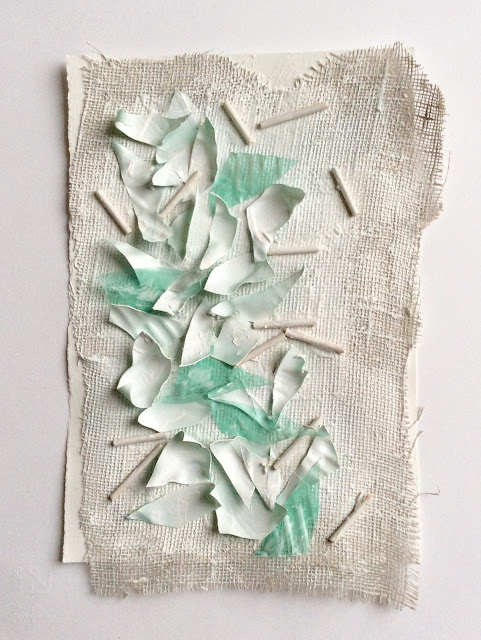 
I chose rough and straightforward materials in an attempt to translate the intentional rudeness of this powerful head: a rough jute for background, plastic bottles and wood dowels.

Here is a detail 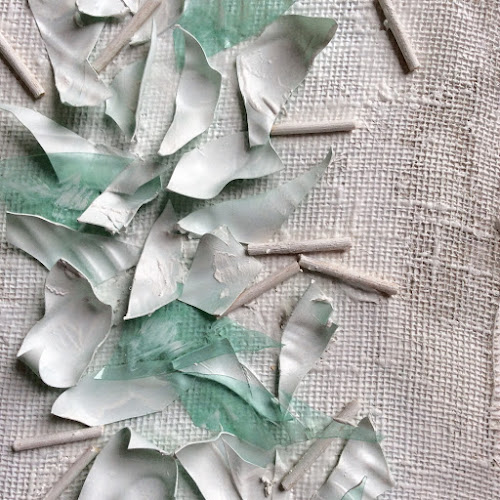 This self-portrait was drawn without looking at my Ipad screen using Art Set app. It is a very simple and intuitive app for drawing quick sketches.

On the left the original coloured one, on the right a black and white version. 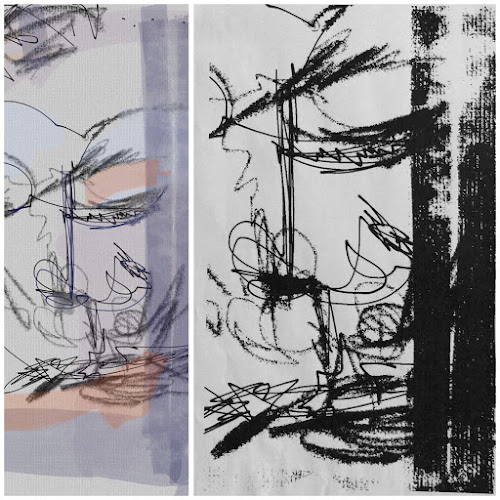 On a sheet of white paper I arranged fibers, fleece, string, tulle net and on the right two strips of foamboard which I carved out with a scalpel. 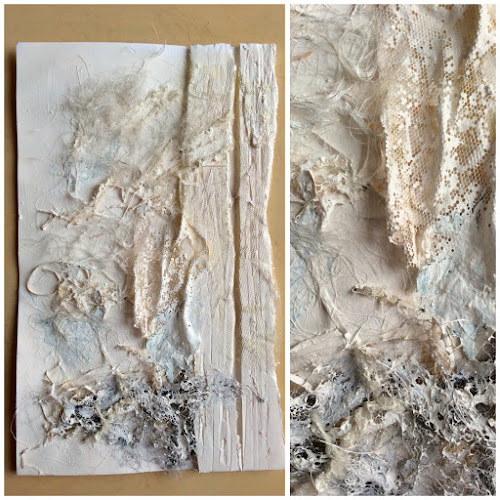 ANOTHER SELF-PORTRAIT, THIS TIME REAL, DRAWN WITHOUT LOOKING 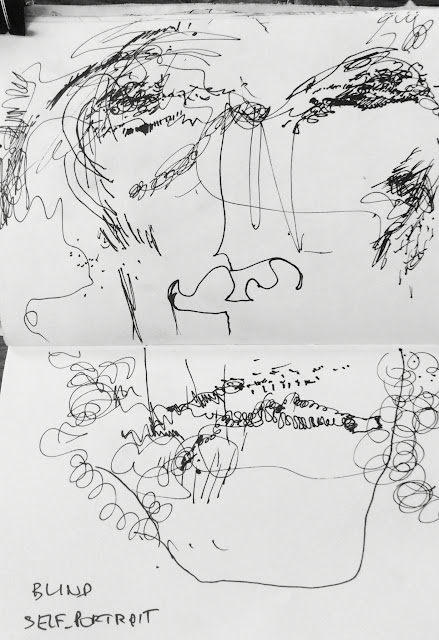 First I traced the main lines with white glue and then stitched into them and added some copper wire. I painted everything white and smeared it here and there with silver and gold acrylic. Then I cut it up in four. 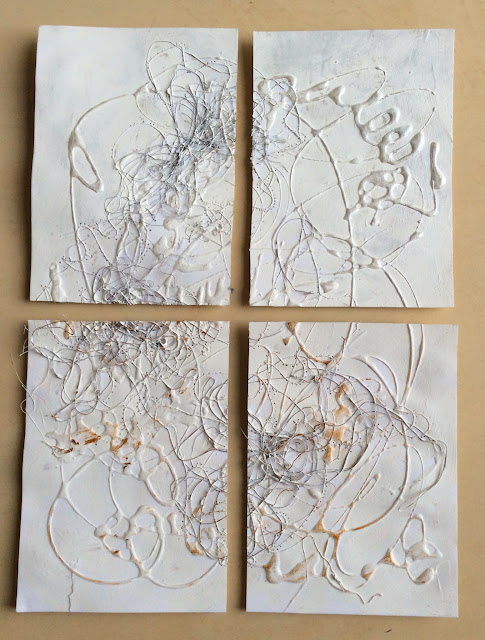 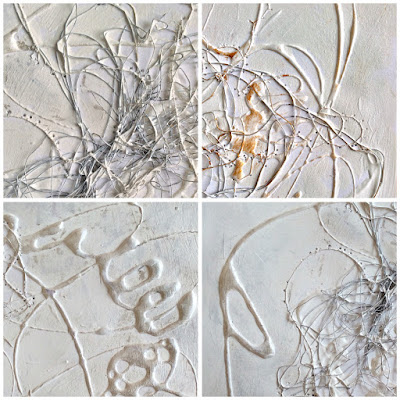 
This is the silver pendant born alongside this chapter on texture, about which I spoke in the last post. The silver fretwork is suspended above a copper background. The black patina on copper has been created with liver of sulphur. 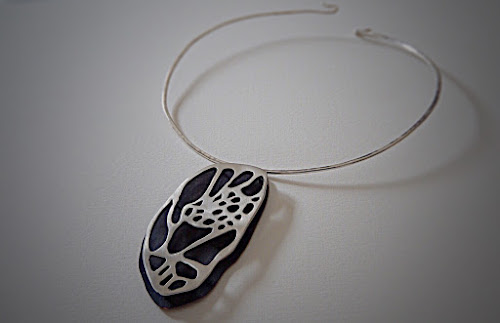 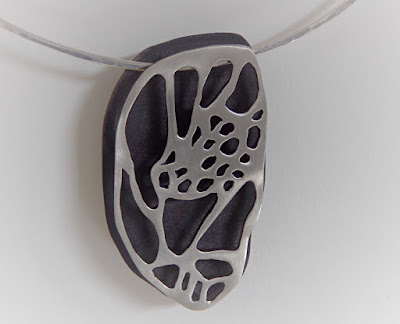